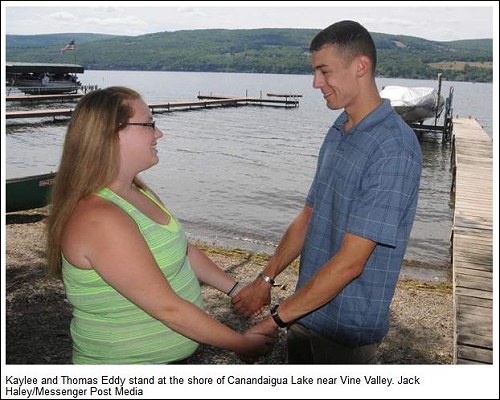 When Gorham resident Joe Testa learned about a program in Florida to give veterans a peaceful place to vacation by the water, he thought of the Finger Lakes.

"They told me how great it was for the vets to spend time on the Gulf of Mexico," said Testa, who lives on East Lake Road. " I thought about the natural resource we have with Canandaigua Lake, among others, and what a great place for a veteran, especially one who has recently returned, to spend time with family and reconnect."

Last week, the first military couple to benefit from the program Testa started in the Finger Lakes, called Finger Lakes Homes for Our Veterans, experienced precisely what Testa had hoped.

"There are not many things you can do to relieve stress," said Marine Cpl. Tom Eddy, 22, a heavy equipment operator who recently returned to his hometown of Canandaigua following two tours in Afghanistan to marry Kaylee, his high school sweetheart.

Stationed at Camp Lejeune, N.C. between overseas tours, Tom said he would sit by the ocean when trying to unwind. "Being next to water is a really big help."

So when Kaylee heard from a friend about Testa's new program, which matches military families with lake property owners who donate their cottages or homes for a week, she knew it was a good plan for them.

Following a whirlwind wedding in Canandaigua and honeymoon in Niagara Falls, the pair settled into a cozy cottage in Vine Valley on the east side of Canandaigua Lake.

The cottage is part of lakefront property owned by members of Jim Spelman's family, his sister and brother-in-law Jean and Paul Schultz. "We met the Eddys and they felt like family," said Spelman. "Everyone was full of hugs."

It was such a rewarding experience, Spelman said his family will host another military family this summer through the program.

Testa works with the Veterans Outreach Center in Rochester to match veterans with lake homeowners through his organization, which is not-for-profit.

Tom said the week by the lake was memorable - and therapeutic. While the ocean is nice, he said, the lake is better. "It is clear and tranquil and calm. You never have rough seas."